It's sad that the Austro-Hungarian empire died in 1918.  It lasted a thousand years, you know. It was known for most of its life as the Holy Roman Empire of the German nation (though, as some wit once remarked, it was neither holy nor Roman.  And most of it wasn't German either).  There is a lot of recollection of the Austro-Hungarian empire in operetta, however. Most operettas are set somewhere in it.

I have recently obtained the Stuttgart version of Strauss II's 1885  Zigeunerbaron (Gypsy Baron) operetta, set in Hungary.  And the Stuttgart version is lightyears better than Harald Serafin's 2011 Moerbisch version.  That 2011 production at Moerbisch was rather sad.  It was Serafin's second last year as Intendant (artistic director) there.  So it was sad that he did not go out on a better note.  He did a lot for operetta generally and Moerbisch in particular during his long tenure there.  Purists did not like his rather cinematic productions but the huge floating stage (3500 sq. m.) and hi-tech facilities at Moerbisch made that possible -- and what he did with it certainly got the audiences in.

The Stuttgart version (I gave the Moerbisch version away) is quite an old production -- dating back to 1975 -- but has recently been put onto DVD.  And one can see why.  It is an excellent interpretation and was obviously long remembered as such.  So somebody has got out the old studio tapes and remastered it for DVD.  I am pleased they did.

This version is a cinematic one rather than a stage version so wide interpretive opportunities were available to the director.   The director was the Austrian Arthur Maria Rabenalt. The conductor was Kurt Eichhorn. Both men are now long deceased.

And Rabenalt was not slow to adapt the show.  Some things were  extended and others cut back.  I could have done without the long introduction.  And I do.  I use the little button on my DVD machine to skip that track.

A mildly amusing aspect of the production is that the ladies in the opera, who are old ladies now (Ellen Shade is my age!), can be seen in the freshness of their youth.  Janet Perry (playing Arsena) looks quite pretty in fact.  But I actually liked the looks of Ellen Shade best.  Her face had character; and she had a stonger voice too.  And she was very convincing in her role as Saffi.  Both ladies are famous American sopranos who have been everywhere and sung everything.

But the casting triumph of the show was undoubtedly making Ivan Rebroff the villainous pig-farmer.

He was a  a comic triumph.  I suspect that he is just naturally a funny man.  His red-faced rage at the rejection of his daughter has to be seen to be believed.  What an actor!  And he figures well in the later part of the show in connection with the war. The pig-farmer role is a big one in any production but he makes it huge. He even manages to be funny as a Hungarian Hussar.

Never have I seen such magnificent shakos as we see in the recruitment scene! The shako is little used as military headgear these days but some French troops still wear it.  Example below: 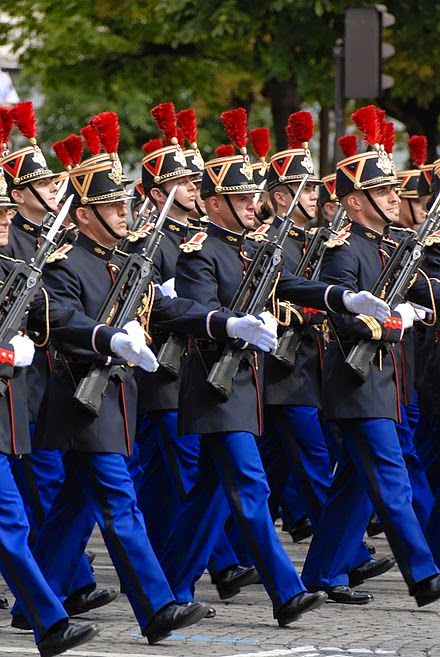 I imagine that Leftists would be horrified by the militarism and patriotism of the latter part of the show but it all ends up as a marvellous romance so pity them!

The music is by Strauss II so is marvellous.  The best track is undoubtedly the justly famous "Als flotter Geist" ("As a lively  spirit"). As is often the case in translation from German, there is no one good translation of "flotter", but we do what we can.  So I give the whole libretto of that part in German below, followed by a non-literal translation into English as re-worked by Ann Ronell. She produces something singable very well. And it does broadly reflect the original -- though the chorus is totally unrelated to the German chorus.

A few small updates:  I have rather immersed myself in the show in recent days.  I have seen it many times courtesy of my trusty DVD player.  So I have found myself occasionally saying to myself "Ist nicht schwer" rather a lot.  That's the only part of the chorus to Als flotter Geist that I remember so far.

I am impressed that an industrial city like Stuttgart has such a lot of facilities for opera.  But it is towards the South of the German lands so I suspect that helps.  The South is the origin of most German music.  Though Brahms was a Hamburger! (I crack that joke over and over.  Most people get it pretty quickly).

I was impressed by the performance of Graf Homonay. His lines are often real tongue-twisters -- really rapid-fire.  I couldn't say them to save myself.  So I eventually looked up who was playing him.  It was Wolfgang Brendel -- who is of course a very prominent baritone.  He deserves his fame.

Something I found curious about Ellen Shade (Saffi) was that her features were rather immobile -- a great contrast with the very mobile Dagmar Schellenberger.  But Shade had a particular role that suited her.  Her role was as someone sincere and intense rather than as someone clever and volatile -- and her rather still face did give a good impression of intensity.  She was well cast. I enjoyed watching her.

My history has made me train wild animals but I'm more famed
Because I've really trained myself to be as spry as any elf
The circus life taught me a lot, now the circus is finished but I'm not
For I'm not afraid to potter round the dark
I'll breakfast on tomorrow's question mark
Adventure is in my blood why any lion could smell it well
But I always hold the whip and I'll never let it slip
Whatever comes I'll take the good and send the rest to hell

Roaming free as the breeze
What's to stop me and why?
I can live as I please
Open road, open sky

My lion taming acting was enough to create quite a buzz
From Timbuctu to Samarkand I wowed them in the hinterland
I was king of the king of the beasts on the stage
Why the public wouldn't let me out of my cage
They loved it when the lions licked my paws
And I got the lion's share of their applause
I follow with the bold and the brave when the bold are gone
Whatever I wish I'll be when the wish appeals to me
For there's a thing worth more than gold
My creed! I must go!

There are many versions of the show online