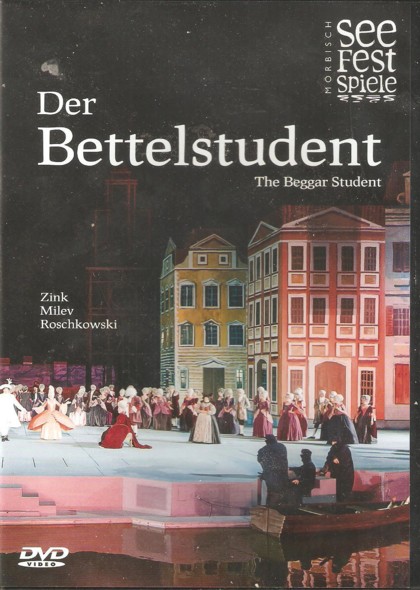 I recently watched the 2013 offering from Moerbisch, "Das größte Operettenfestival der Welt am Neusiedler See im österreichischen Burgenland" set in in Poland of 1704, as the show itself tells us.  It was written in 1882. I noted that Moerbisch have their own ballet company, as well as their own choir and orchestra -- up with the NY Met. So they obviously deserve the fulsome description of them that I have just given.

It was a performance of the popular Bettelstudent by Carl Millöcker.  It was the first performance at Moerbisch with KS Dagmar Schellenberger as Intendantin.

The performance had a lot in common with Gilbert & Sullivan.  About the first third of it was quite madcap.  I could have done without the big wigs and absurd gowns on the women but that was of course part of the comic setting.  I note that Harald Serafin also put women into wide gowns and absurd wigs on occasions so Schellenberger was within Moerbisch custom in what she did. I thought that it made the women look like beetles but the audience seemed to like it so I concede defeat on that point. 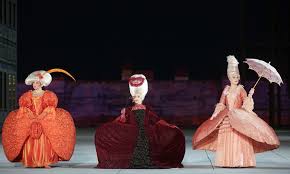 The plot was typical operetta nonsense, complete with with deceptions and misunderstandings.  There was even TWO purloined letters.  No valuable pocket watches this time though.  So the plot lived up to expectations -- with some good twists towards the end

And the expected romance was also there -- though only in the second half. And the resolution of all difficulties at the end was also the expected operetta ending, but with a twist.  Instead of the lovers getting married, they were already married by that time!

I was particularly impressed by the very confident singing of Austrian soprano Cornelia Zink (as Laura) but with her elaborate costume and clownish makeup it was hard to see much of the woman behind the voice.  From the closeups of her face that we got, however, one could see that her facial expressions were very fitting.   I would have liked her to have got the sort of closeups that Schellenberger got at Moerbisch in 2004.  Even in the grotesque deshabille scene one did not get much of an impression of her.  So I am putting up a better picture of her below.  As I expected,  she looks good. She is a doll!  Though she should pay more attention to her roots.

And the lady in the second string story did well too. Daniela Kalin (Bronislava) does not appear to be well-known but somehow transcended her garb and came over as a very attractive lady. We saw quite a lot of her in the deshasbille scene so that would have helped.  She reminded me of A.K. Wigger, which is high praise from me.  I predict she will go far.  Schellenberger obviously knows talent when she sees it (or hears it).

A very romantic show in the end and great fun for that.  I was sad that there was no big applause for anyone in particular at the end of the show.  I thought Zink deserved more.  The Saxon Oberst (Milko Milev) deserved more too. His was an unsympathetic part but he played it very well. 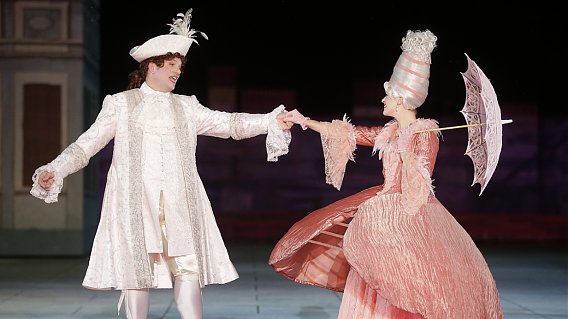 With her fake Prince

After my first watching of the show, for subsequent viewings I did my usual trick of skipping the first few tracks and that got me straight into the interesting bit, which I really enjoyed.

It's not always true but operetta performances often start with boring bits, partly for scene-setting purposes, I guess. The scene of men dressed up as ducks and dogs that introduced the 2004 Moerbisch performance of Graefin Maritza was particularly absurd.  I don't know what Harald Serafin had in mind when he put that on but I very nearly stopped watching the show at that point.  Maybe I missed a brilliant allegory but there was just no point to it that I could see.

A small absurd touch that I did enjoy in Bettelstudent, I missed the first time around:  The fake Prince arrives in a sedan chair to the sound of a steam train!  I really like the Moerbisch steam train (Heck!  I like ALL steam trains!) so even that allusion to it was pleasing.  Congratulations to whoever thought of that absurd idea.

A small thought. The villains in Bettelstudent were Saxons. As Schellenberger is a Saxon, I thought she might have changed that, but perhaps that would have been complicated. And why did they all have red hair? A mark of villainy? 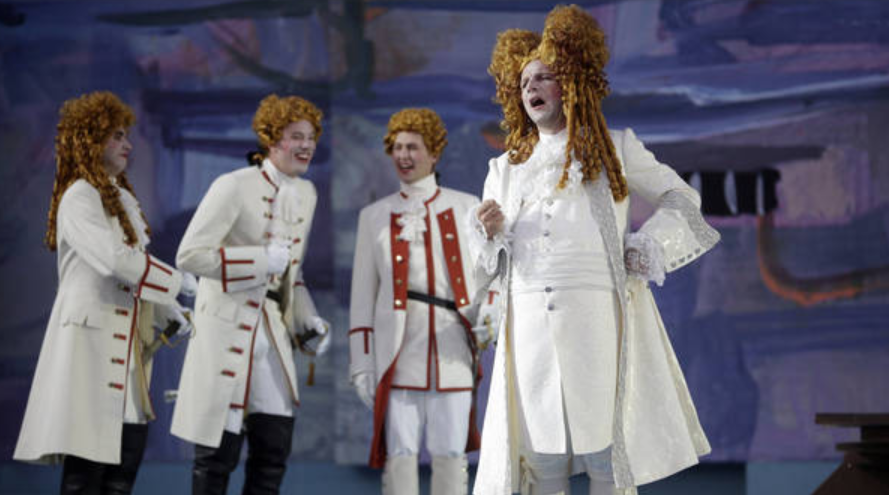 The Saxon soldiery with their "Oberst"

It was interesting that even in 1882 Millöcker was using speech "per du" for comic effect.  The whole custom seems needlessly complicated from an Anglo point of view.  I presume Millöcker wrote that segment.  It could have been a later interpolation, of course.

There was an odd bracket towards the end of the show commenting on the financial crisis among the  European banks in 2008+ but one rather wonders why.  The only message seemed to be that the little  guy gets shafted.  That is true but why did it need to be included in this show?  If it was meant to be humorous it missed its mark with the audience -- judged by applause.

A very small point that I should probably NOT mention is that the bishop in the wedding procession is emphatically portrayed as shaky -- as having Parkinson's disease, one imagines.  As politically incorrect as I am, I can see the funny side of that but many would not. Though respect for the clergy is very low in Western Europe generally these days so maybe the clergy could not complain. They have brought disrespect down on their own heads with various scandals.