I have now watched Lehar's Zarewitsch a couple of times and thoroughly enjoyed it.  It is phenomenally romantic. It doesn't have any terribly memorable arias in it but they are good while they last. The show first appeared in 1927.

The version I have is another cinematic performance from 1973 directed by Rabenault; conductor Willy Mattes.

I was most impressed by the performance of Cretan soprano Teresa Stratas.  She really threw herself into the part and gave a mighty performance as a very emotional "Sonja". Maybe her Greek background helped with the emotionality.  She really makes the show in this production. I am not alone in my admiration for her talent.  She is an old lady now but she went on to a very distinguished operatic career,  becoming something of a fixture at the NY Met.

The show differs from most operettas in that everybody doesn't get married at the end of it but the sustained romanticism throughout the show rather compensates for that.  And there is a definite suggestion that the lovers have not seen the last of one-another. 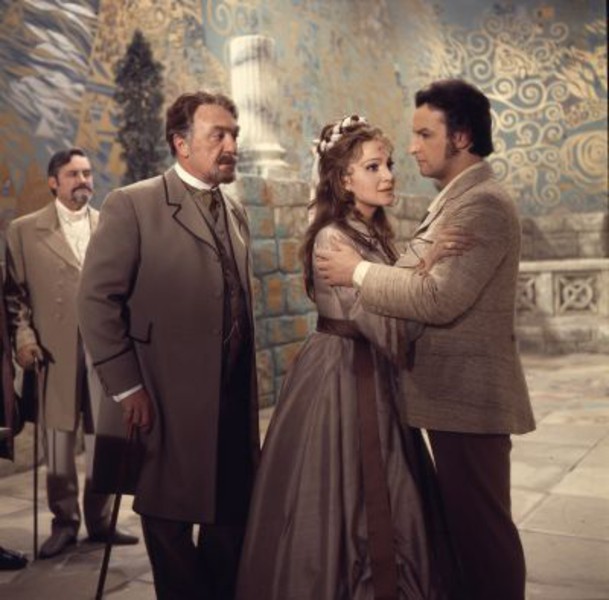 All operettas seem to need a second story running alongside the main story and the story about Ivan and Mascha fulfils that role in this show.  And their story does provide some good light relief.  Casting a bass as Ivan was very effective.  From what I have seen, most women would forgive a bass a lot and Mascha does have a lot to forgive.  There was some clever casting of "Ivan" there. Harald Juhnke was primarily a comic actor rather than an operatic singer but the role was a comic one and he was excellent at it.

And casting Birke Bruck as Mascha was well done too.  She is/was undoubtedly a good-looking lady and her fury when she was envying the statue was wonderfully and hilariously done.

I was rather pleased with myself that I recognized the refuge of the lovers as being in Greece.  Now that I have read the notes that came with the DVD, I see that Greece was intended.

A premodern feature that I noted in Zigeunerbaron also was the attitude to the military.  The Zarewitsch rejoices when he is sent back to his regiment.  Only conservatives would understand that in this day and age. Our Prince Harry must be a conservative. He had very happy days in the army. As indeed did I. Army men do indeed generally like being in the army.  They like the army as much as they dislike the army top brass.  Such is the complex world we live in.

The intense romanticism of the show does help me to understand  why it has been performed and recorded so many, many times.    An operetta is full of happiness.