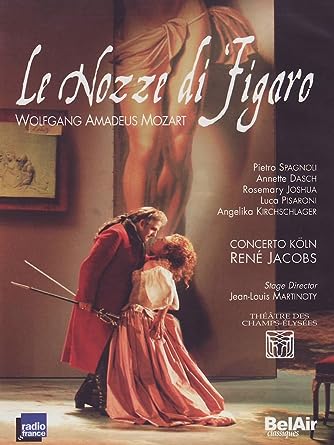 I have just finished watching on DVD a 2006 French performance, sung in the original Italian with English subtitles, of "The Marriage of Figaro" by Mozart.  It is one of the most famous operas of all time so I am perfectly sure that I can say nothing original about it -- except perhaps to say that I still prefer Viennese operetta. Operetta is shorter and wittier.  But Mozart's wonderful music makes up for everything, of course.  The overture is one of my favourite pieces.

So what I want to do now is just to leave a few notes here for my own future reference about the cast of the performance I saw. I might at first note something amusing, however.  Apparently there was an IKEA in the 18th century!  The opening scene is of Figaro putting bits of a disassembled bed together!  In the original libretto he is just measuring up the room at that point so the producers of this show obviously had a little joke.

Pietro Spagnoli as the Count was very Italian, rather like a Mafia Don, so definitely well-cast.  Luca Pisaroni as Figaro is actually Venezuelan-born but probably from Italian parents.  He grew up in Italy, anyway. He gave a very strong performance.

Well-known German soprano Annette Dasch was strikingly pretty as the Countess. She is quite tall too, taller than everyone else in the cast aside from Figaro -- and she seems about the same height as him. And we see at one point that she is wearing FLAT shoes!

Her looks rather show up the gaunt-looking Welsh soprano Rosemary Joshua as Susanna, though Susanna was very well played. Joshua is very experienced in that role. Maybe Joshua was on a very severe diet at the time. I gather she was born in 1970 or thereabouts so should not have been noticeably aged in 2006.

I disliked Austrian mezzo Angelika Kirchschlager as Cherubino. She is probably a fine woman but I thought she was very unconvincing in the role.  But I detest trouser roles anyway.  The part was originally written for a male so why not stick with that?  I appear to be quite out of tune with the times in that matter, though.  There is actually a currently fashionable feminist claim that men can play women's roles and women can play men's roles and it makes no difference.  As far as I can see, the difference is in fact highly visible.  It is just not good casting.

Looking into the ethnicity of opera singers is a little hobby of mine.  I like to guess what they are on first encountering a singer, even though I mostly get it wrong.  So Sophie Pondjiclis as Marcellina quite puzzled me. At times she looked very Italian but at others did not.  So I looked her up.  She is Greek.  So that rather solved it.  Greeks can be as explosive as Italians but don't do it as often.  That is as I have seen it, anyway.

Some of the info above was a little hard to get. Most of the singers are not well-known.  I very often in such searches find that I can get the info I want from sites in German only.  There is just nothing in English.

When looking up Pondjiclis there was nothing useful in English so I got the info off a non-English site.  I assumed that I was reading German but when I looked closely I saw it was in French, a language I have never studied. The foreigners begin at Calais, you know, to bowdlerize an old expression.

There are online quite a lot of excerpts from this performance, particularly of the arias sung  by Annette Dasch.  Below are two. Both have English subtitles.  The first is "Dove sono i bei momenti":

And we also have "Che soave zeffiretto"