Austro/Hungarian operetta is light-hearted opera written  around a hundred years ago principally for the entertainment of the inhabitants of Wien (Vienna) which was at that time the capital of an ancient and major European state, the Austro/Hungarian empire.

Before the 19th century, opera was fairly cheerful. And among his 22 operas, Mozart in particular wrote a lot of Opera buffa, comic opera.  Comic or not, just the brilliant overtures of some of Mozart's operas reduce me to tears of joy. There is something unearthly in Mozart, for those who can hear it. But even Handel operas had a lot of joy in them.  At the finale of Giulio Cesare, for instance, we find in the finale everybody lined up and singing lustily a triumphant song.

But in the more famous 19th century, French and Italian opera became much more morbid.  They are romantic but everybody seems to die at the end of them. In "Carmen", for instance, Carmen gets stabbed to death by her jealous lover and in "Aida" the lovers end up immured.  So I enjoy the wonderful arias from 19th century French and Italian opera but I have never been inclined to watch much of the operas concerned:  Too bleak for me.  So for a long time, my liking for opera stopped at Mozart.

I have long been familiar with the more famous arias from operetta but grand opera had long put me off wanting to watch anything even vaguely recent.  About 6 months ago, however, I somehow got motivated to have a look at the more famous operettas, starting, of course, with  Im weissen Roessl, "The white horse inn" -- in the Moerbisch performance.  I was immediately enraptured: good music, great jokes, attractive singers, joyous dancing, total romance and a gloriously happy ending.  What more could one ask?  Realistic it was not but great fun it was. I must have watched the show somewhere between 30 and 50 times by now but I still laugh at the jokes every time.  They are that good.

Operettas and indeed most operas are romantic -- even though the outcome differs.  I am inclined to think that the most romantic of all is Zarewitsch by Lehar. And in true operetta style, advancing the romance by getting the heir to the throne of all  the Russias drunk on champagne is a definite classic.  Vienna was never a place for teetotalling.  There must have been trainloads of champagne going from the vineyards of France to Vienna.

Although it is easy to enjoy, I would like to make the case that it is actually very sophisticated entertainment.  For a start, the artistic requirements of both grand opera and operetta are quite high. The vocal feats required of the singers are maximal in both genres and good acting is, if anything, even more important in operetta.  Putting a joke across requires some very good timing and expression. And it is broadly the same singers who sing in both.

Secondly, Austro/Hungarian operetta was written for people who had it all.  They lived at the heart of an enormously rich civilization.  Vienna before WWI was not only a great and rich imperial capital with many nations under its rule but it was also at the cutting edge culturally and intellectually.

It was, for instance, the time and place of the immensely influential Sigmund Freud, by far the leading psychologist of the time. He was a great observer and I  quote him occasionally still. And the immense distinction of Vienna in analytical philosophy cannot be gainsaid -- Schlick, Wittgenstein etc.  And in economics the luminaries of the prewar Austrian school (Carl Menger; Eugen Böhm Ritter von Bawerk etc.) are honoured to this day -- though not among Leftists.  Vienna had a very good claim at that time to be the intellectual capital of the world.

And, musically, it started out on top -- with the enormous heritage of the great Austrian composers -- Mozart, Haydn, Beethoven, Schubert etc -- so any new compositions had a lot to live up to.  And the wonder is that some composers stood out even in that environment -- with Strauss II being merely the best known of many.  And there were vast numbers of innovative Viennese artists too, led by Klimt in particular

So the Viennese had it all. And what you want when you have it all is entertainment.  And to be entertaining to such an indulged and sophisticated audience you had to be pretty good.  So I see the lightness and frivolity of operetta not as trivial but as a major cultural achievement.

As far as I can tell, waltzing seems to have a rather staid reputation in the Anglosphere but it is not at all staid in Austro/Hungarian operetta.  The joyous climax to a waltz can be where the lady throws her arms out wide while the man spins her around with his hands on her waist only.  That is very exciting.  Feminists would hate it.  Let me close with a famous line from Im weissen Roessl:  "Ein Liebeslied muss ein Walzer sein" (A song of love has to be a waltz). 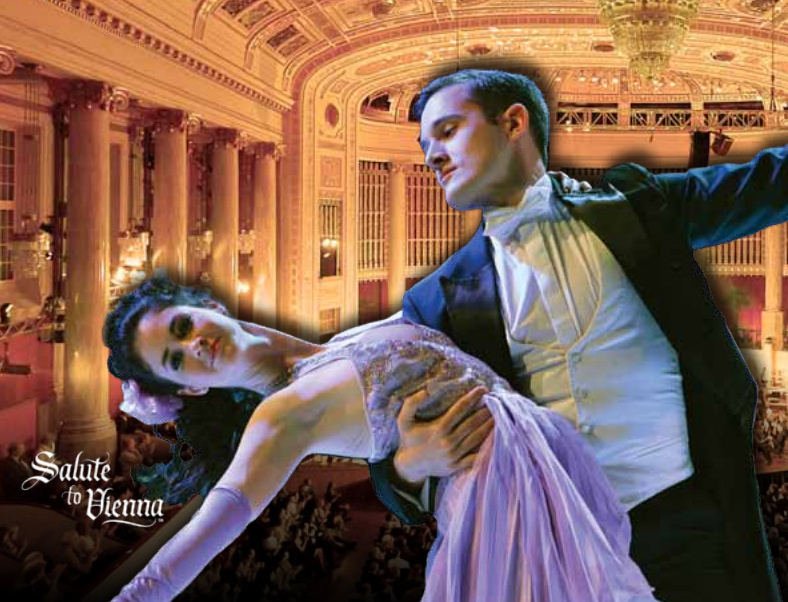 Feminists would hate the scene above but I'm betting that the lady concerned was pleased to be there.