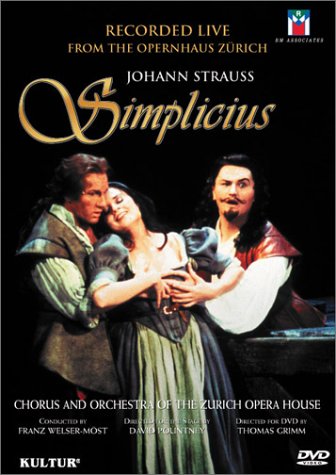 I hesitated for some time before ordering this Singspiel.  I read the synopsis and was not impressed:  Too complicated and not set in an operetta-type setting.  But the music was by Strauss II so I ordered it.

And I disliked it from the beginning.  The surrealist staging was way outside my liking.  I guess some people find it amusing or interesting but I just found it tedious.  A NYC writer felt the same.  He wrote:

"David Pountney’s production is not attuned to the bulk of the work, which can hardly breathe under the weight of his heavy symbolism and the heavy, enormous sets"

I think Pountney is one of the many directors of stage performances these days who is trying to show how smart HE is rather than how good the work is.  Despicable and boring.  I paid to see the work of Strauss, not the work of Pountney. I will order nothing more if he is part of it

But I kept on watching, all the while keeping an eye on the track numbers.  I have often found that the initial tracks of an operetta DVD are very skippable so I was looking for a point in the show that seemed a good starting point for me.  And I did find one! Track 14, about half of the way through the show.  From that point on it became closer to a normal operetta, even having quite a few laughs.  And the customary two happy couples at the end, of course.  With a lot of cuts to the many slow-moving bits and a naturalistic setting, it could be quite a reasonable operetta.

And the plot was not really as complicated as it appeared to be.  The story is that a soldier killed his brother in a battle of the terrible "30 years" war that raged in Central and Western Europe during the 17th century.  He was so grief-stricken at what he had done that he put his eldest son into a monastery and retired with his little son into the forest to lead the life of a religious hermit.

But the little son eventually grew up and was taken back into society as an ingenue. Meanwhile it transpired that the father and son were of noble birth and were wanted for the purposes of marrying into another noble and rich family.  But nobody knew where the father was and nobody knew who the son was.  So a couple of other claimants emerged wanting to marry the rich bride.

They were discredited, however, and we eventually found out who the son was.  And that simplified everything so that, after a few complications, everybody got married to the spouse of their choice.  Quite a simple plot, basically, and quite in operetta style.

The involvement of Swedes in what was basically a German civil war may seem odd to some but is good history.  Der Schwed did indeed take part. Protestant King Gustavus Adolphus of Sweden did  lead his troops South to help the German Protestants, having a considerable influence on the outcome. He could in fact be said to have saved Protestantism in Germany.

I watched the show three times but felt that there was nothing in it that would draw me back to it so I gave the DVD away:  No great arias, no great singing, not much in the way of jokes and repellent staging. It's just not jolly.  But Martina Jancova as Tilly is attractive and acted well, while Piotr Beczala is a classic love-stricken tenor. Some other operettas I have watched innumerable times.  When watching Wienerblut, for instance,  I start laughing long before the punchlines of the jokes arrive.

An excerpt from Simplicius  here -- with subtitles! Judge for yourself.  It's just bombast.