This Singspiel was composed by Lehar in 1909 and was apparently set in his day.  The production I have is another cinematic version -- from 1972 -- with the late Erich Kunz as the big name -- he wielded a mean monocle!  The entire show is online here, but without subtitles.  It deserves more recognition than it usually seems to get IMHO

The story is about a profligate aristocrat (played by the Austrian  baritone Eberhard Wächter) and the strange marriage arrangements he enters into to restore his finances.

The painter's girlfriend, little Helga Papouschek, played well and scrubbed up well.  She has been described as a "vielseitige Schauspielerin und Sängerin".  I can see that.  She portrayed a number of moods convincingly.

And the best aria (IMHO) came from the "second string" story -- "Schauen Sie freundlichst mich an", where the artist and his nervous lover reassure one another.  They really made a very suitable couple.  It puzzles me why they  spoke per "Sie" (formal) rather than per "du" (informal), though. Something to do with tensions between them at that time, I guess.  On earlier occasions they do speak per "du"

There are quite a lot of jokes in the show but you have to be attuned to them.  I found the dropped-glove episode hilarious in its corniness, for instance. And it was an amusing touch when the unflappable Graf who had unwittingly disrespected his donor on being introduced to him simply replied Sehr angenehm ("pleased to meet you") on being apprised of his mistake.

Early in the show (around the 7 minute mark online) you can see quite a bit of an attractive barmaid with a well-filled blouse whom I thought might have been mentioned in the credits -- but she was not.  A barmaid dancing with a prince is a very low-probability event -- but this is operetta.  I love it.

And, as seems common in operetta, alcohol is something of a star.  Mostly it was skolling Schnapps in this case but we did get around to the champagne eventually. And the birdbath cut-glass champagne glasses they used in the end are just like the old-fashioned ones that I have.  I don't agree with the fashion for champagne flutes at all at all.  Very inelegant.

The plot is typical operetta absurdity, though notes accompanying  the DVD suggest that similar things did happen in real life  at the time.  And the ending was very much as one expects of operetta, with THREE happy couples getting married.  After having watched two operettas that violated that formula -- Paganini and Zarewitsch, it was a welcome return to form.

In summary:  A great romance with a marvellously happy ending. I liked the way the baritone's lady mostly looked and sang over his shoulder after they had accepted one-another. She looked best in those later scenes in my undoubtedly wicked opinion. She looks better happy.  They certainly made a most convincing couple.  I would be moderately surprised if he did not get into her pants after hours.

Erich Kunz played Basil, the Polish Prince and delegate to the Austrian Reichsrat.  He of course does the part very convincingly, as indeed do all the singers.  The costumes were all well done -- with very big hats on the ladies at times and big and very luxurious-looking sable collars on the coats worn by the men. 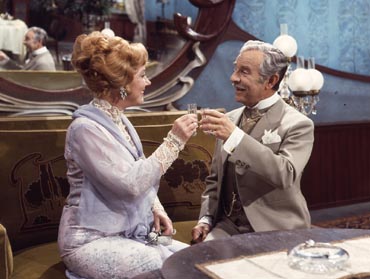 Erich Kunz gets his girl

The leading soprano, the long-necked Lilian Sukis, of Lithuanian origins, is now an old lady in her mid-70s but had a  lily-like and languid attractiveness in this performance.  She was particularly associated with the Bavarian State Opera in her day.  She was both an excellent soprano and a beautiful woman.  Hard to  beat!

The leading man was the late Eberhard Wächter, an Austrian baritone of some distinction in his day, though he was new to me. That he became Intendant of the Wiener Staatsoper is a considerable recognition of his artistry.  I did like his looks -- almost hypermasculine, with a big heavy head and a strong jaw.  It's a characteristic I have seen in other big male parts in operettas.  Having such characteristics is clearly an advantage in getting good parts in operetta.  I think of Rodney Gilfry in my copy of Die Lustige Witwe and Rainhard Fendrich in my copy of Im weissen Roessl as other examples of that. And they all get the girl!

So this was a show with a beautiful woman in the lead and a very  handsome man! Definitely easy on the eye.  That is a big plus in operetta, IMHO. 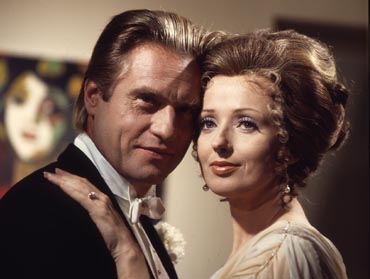 Wächter sang and acted very well, at any event. I am sad that he is deceased. He was a magnificent presence. He was undoubtedly the star of the show. He was somewhat more expressive than his lady, in my opinion, though she had a powerful line in rapt gazes. The later very romantic parts were especially well done.  They had convincing sincerity.  It was a love-at-first-sight story but since both members of the couple were good-looking, that has some plausibility.  His "come-to-me" look towards the end after his lady had unwittingly insulted him was quite brilliant.  It got him the girl too. So everyone ended up happy, in true operetta style.