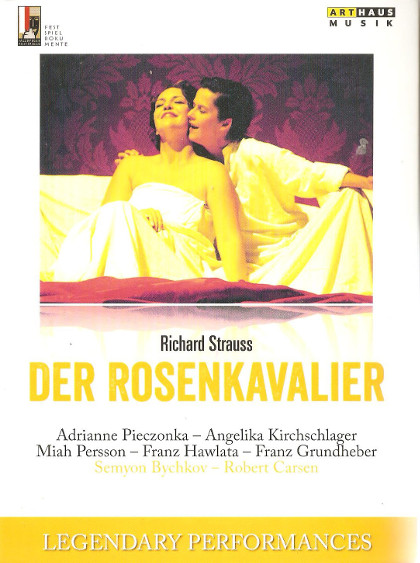 Richard Strauss is a long way from being Johann Strauss and I would not normally pay a cent for anything by him --  but Der Rosenkavalier is often described as a comic opera.  So I thought that maybe Richard Strauss had his moments.  He didn't.  It was the DVD set from the 2004 Salzburg festival that I bought and I am mightily glad that I did not pay much for it.  There was not a single laugh in it that I could see  -- and not a single memorable aria.

I realize however that I am coming from a particular place. I like Austro/Hungarian operetta from either side of the dawning of the 20th century, and although Richard Strauss is of roughly that period, he is not of that ilk.  He belongs within the tradition of 19th century grand opera. He is a "romantic" in the sense that Wagner and Verdi were romantics. He has a few good moments but that is the best I can say of him.

Der Rosenkavalier was full of meandering "philosophical" reflections  that could have been completely excised for the benefit of the story -- and the first half of the show was a sustained display of disgusting behaviour.

Hitler liked the works of Richard Strauss and I think I can see why. "Baron Ox" would have been a sympathetic figure to Nazis. He is of course the very anathema to me.

The only thing that distinguishes the show from a 19th century grand opera is that it had a happy ending.  We must be thankful for small mercies I guess.  It was first performed in 1911 when operetta was in full popularity so the happy ending may have been a concession to the times.

Hmmmm.... On reflection, I guess that what I am supposed to find funny was the pomposity of the baron and his various downfalls.  But I found his egotism and bad attitude to women all too real. I guess I should watch it again but just watching it once was trial enough for me.  I just don't find arrogance and a bad attitude to women funny.