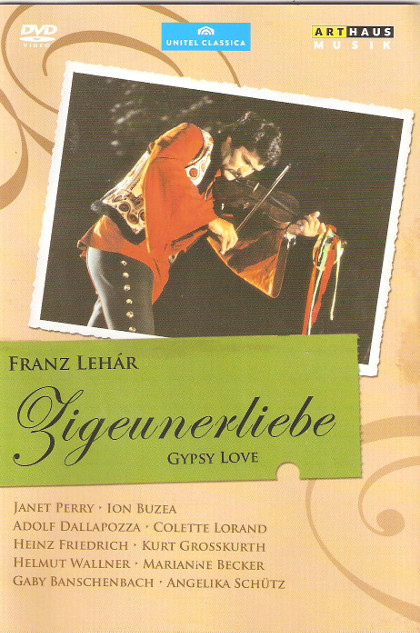 I guess it shows what a hopeless academic I am that I could write the heading above. Only an academic would compare a Viennese operetta with a nigh-unintelligible Leftist philosopher. I guess they both spoke German. There's that to it.


In the late 19th century and early 20th century, there seems to have been some fascination with Gypsies as living "free" lives.  You see it in Carmen, in Zigeunerliebe and Il Trovatore, for instance. Lehar's Zigeunerliebe has a somewhat minor place in operatic history but I was watching a 1973 cinematic version of it last night so it is in front of my mind at the moment.

Both Carmen and Zigeunerliebe feature a fascination with gypsy life.  And the portrayal is fairly similar in both cases.  The major difference is that the ending is tragic in the opera (Carmen) and happy in the operetta (Zigeunerliebe).  But that's basically the difference between the two art-forms.  In some operettas there are THREE happy couples at the end (e.g. Der Graf von Luxemburg and Im weissen Roessl) so Zigeunerliebe is actually rather morose in having only one.  The scheming old father was apparently seen as not deserving of marital bliss.

Both Carmen and Zigeunerliebe are quite moral tales.  They say that a desire for freedom can be strong but freedom is in the end illusory -- or at least has a lot of downside.

Which brings me to GWF Hegel -- who thought the same.  Hegel was of course the philosophical inspiration of both Karl Marx and Adolf Hitler but still seems popular among the small number of Leftists who are capable of thinking at any depth.  And you DO need to be a deep thinker to follow Hegel.  His writings are a real struggle to follow.  I gather that he gave satisfying  lectures, however, and after people were inspired by his lectures, they made the effort of following his writings  -- and so generally broadcast his name and fame.  I have a more extended comment on his writings here.

But the problem Hegel and the opera characters were addressing is a real one.  We all like to be free from restrictions but a moment's thought will tell us that rights connote duties. For example, my right not to be assaulted is everybody elses's duty  not to assault me. Similarly, the opportunity Gypsies have to move around a lot makes it difficult for them to earn a living.  They have to resort to some rather unpleasant work, such as begging and stealing.

Hegel, however carries that insight to an extreme degree.  He basically said all freedom is an illusion.  Being a philosopher, however, he did not actually deny freedom.  He redefined it -- saying that the only freedom was freedom to march in lockstep with everyone else.  His idea of freedom was the freedom of the ant.  His model of an ideal human society was an anthill.

Fortunately, the English have always valued their individual liberties so Hegel's ideas were not widely accepted in England and its derivative societies.  And both in England and elsewhere the 19th century also produced some good defences of individual liberties -- both in the persons  of various economists (culminating in the thinking of Boehm-Bawerk) and in the very lucid philosophical writings of J.S. Mill. Sadly, Mill did not practice what he preached.  His votes in the House of Commons were thoroughly socialist.  Rather amazingly, he was a crypto-Hegelian.  His On Liberty seems to have been just an intellectual exercise for him.

Fortunately the classical liberal ideas of Mill and others developed in the 20th century to thinking now known as libertarianism -- thinking which sets out in detail how a very much larger scope for liberty than we currently have can be achieved. And insofar as libertarian ideas have been applied (for instance in the policies of Margaret Thatcher and Ronald Reagan) the results have been very benign -- a stark contrast with the ideas of GWF Hegel.

So there is an answer to the opera characters and others who idolize the Gypsies:  Freedom can never be absolute but we can go much further towards it than we so far have done.

So Lehar's Zigeuner Liebe was rather insightfully didactic.  The glorification of gypsies was rather common  in Austro/Hungarian operetta so Lehar used his great talents in an attempt to right the balance.  In this show he first set out the attractions of the gypsy life, as conventionally conceived, and then showed its downside.  And there was lots of good singing to make the lesson enjoyable

Didactic art can be very good (e.g. Dickens) but that tends to get subordinated to the message.  And in this show there were very few jokes and no characters that one could identify with.  Janet Perry is/was a very nice looking lady and a good singer but I certainly could not see much engaging about the thoroughly scatty woman she portrayed.

And I must comment on "Ilona". She was convincingly portrayed by Colette Lorand and she fitted exactly what my father would have called "An old bomb".  I am not sure how widely that bit of Australian slang is understood but -- approximately --  it means an older lady who thinks she is still as attractive as she was in her youth and is rather arrogant and egotistical as a result:  An unpleasant but realistic character. I quite loathed her. But in a characteristic  Australian way I loathe pretention and egotism generally. It's "bunging on an act" and it's not "fair dinkum".  I could translate those expressions but I think I already have.

So it was good a show but not one to return to very often.