I have just watched (twice) the 1984 Covent Garden performance of Strauss's Die Fledermaus.  The time travel concerned was made possible by a DVD. 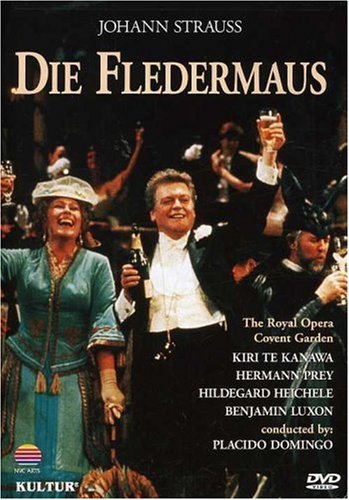 Hermann Prey and Kiri te Kanawa pictured in the finale

The Royal Opera House at Covent Garden is everything you expect of an Opera House -- a large and ornate building  that gives the impression of a no-expenses-spared project.  I was pleased to see the the stage curtains featured prominently the Royal cipher (EIIR).

The opera itself was brilliant entertainment, with lots of laughs in it, particularly in Act 3.  It was almost as madcap as Gilbert & Sullivan (NOTHING can be as madcap as Trial by Jury).  It well deserves the innumerable performances that have been done of it.

Perhaps because of my interest in languages, the scene that amused me most was when the husband and the jailer were introduced as Frenchmen and they had to pretend to speak French to one-another even though they knew just about as much French as I do, which is very little. They managed a few common but totally unconnected French words and even threw in a bit of Italian.

Quoting excerpts from earlier operettas in a new operetta seems to be rather commonly done.  Nobody seems bothered about plagiarism.   So when Prey burst into a good rendition of Flotter Geist (from Zigeuner Baron) during the party entertainment segment it was simply appreciated as a good performance.  I imagine he has sung the whole of that part on occasions. 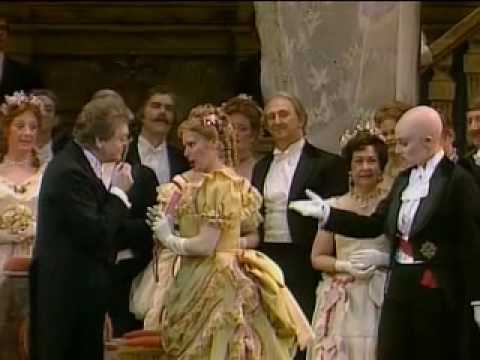 Another amusing reference was in Act 3 when the drunken jail warder asked the conductor to play the music for a Radames aria from "Aida" so he could sing it.  He made a hash of it of course but the conductor was the omnipresent Placido Domingo, who has sung the part of Radames on many occasions, so we had the odd and amusing sight of the conductor singing along to help out a singer with a song.  Very creative!

And a  big surprise was the appearance in the party entertainment  segment of every woman's favourite soulful singer -- "Sharl" Aznavour -- playing, what else, Charles Aznavour. To get him along in a cameo role was undoubtedly a bit of a coup for the production.  You don't have to understand a word Aznavour sings to get the soulfulness.  He is a mobile evocation of tragedy. He is not my cup of tea at all but he is undoubtedly a supreme master of his genre.

And the dancing was surprisingly good too.  The dancing in operas and operettas can be pretty basic.  I have an example in mind -- from Britain -- but will not be so unkind as to record it.  So when the ballet company floated into the party entertainment scene it was a real pleasure

The chief male dancer impressed me.  It is of course routine for male dancers to lift the ballerina above their heads at some stage, though few have been as good at it as Nureyev.  He would lift the lady up with two hands and then hold her there briefy with one hand -- a great feat of strength.  And the dancer on this occasion was even better.  He exited holding the ballerina above his head -- with his grip on just one of her ankles. Just holding her there would be pretty good, let alone walking off with her like that.  Update:  On further viewing he seems to have a hand on his lady's bottom too.  But it is still quite a feat.

And where did the director get the "two old ladies" segment?  It seemed straight out of vaudeville.  Does vaudeville still exist somewhere in England?  Maybe in the clubs.  It was very amusing.

And I was rather pleased at how un-Islamic the show was.  It featured a huge amount of alcoholic imbibing and not a little of  amusing drunkenness.  Towards the end the whole proceedings were said to be a celebration of Champagne!  I think I too would blow myself up if I were a Muslim.

Speaking of 21st century concerns, I was pleased at how good the ethnic stereotyping was in the casting. Ethnic stereotypes are absolutely verboten these days but they have been something of an interest of mine. I have even written academic articles on the subject (here and  here). So I was pleased to see that the Italian music master could not have been more Southern Italian in appearance and manners:  A Neapolitanian, I would have thought. But he was in fact Welsh-born Dennis O'Neill.  Maybe his dark eyes and heavy eyebrows helped. And I was initially a bit critical of "Dr Falke" looking so English -- but I note now that he is introduced as "from London" -- so the casting director and I obviously thought similarly.  And Hermann Prey looked as German as he is.

The performance as a whole was a distinguished one indeed.  Getting Kiri te Kanawa as leading lady was a coup and she was at her very good best.  She both sang and acted admirably.  Though  in the acclaimed czardas scene it seemed a bit  strange to me to have a half-Maori lady proclaiming her passionate love of her Hungarian homeland! 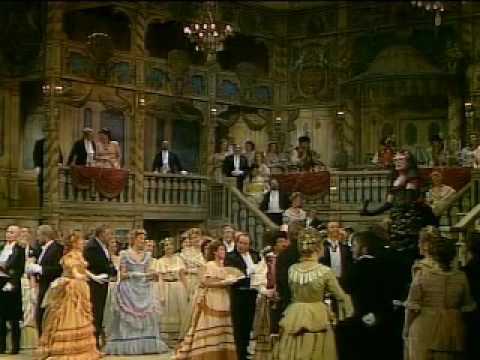 I guess my interest in ethnic matters betrayed me there. And Hermann Prey as the husband was in his element. His expression when his wife was expounding his sins in Act 3 was very well and amusingly done.

So what did I not like about the production?  I LOATHED the "trouser role", where the Prince was played by a bald-headed woman.  The role was originally written that way but I am obviously not alone in my response to it --  as quite a lot of productions have put a man into the role.  And couldn't they at least have put some hair on her?  A bald-headed woman is a tragedy. The lady sang well enough but looking at her was a pain.

I suppose the producer at Covent Garden was being true to the text in casting that role but I wish he had been true to the text throughout. He clearly couldn't decide whether to produce the show in German or English.  It was mostly in German but also substantially in English.  Because I have a degree of age-related hearing loss, I understood the German better -- because it had subtitles -- while  the English did not.  The English bits were mainly to get laughs  -- which succeeded -- but why not be done with it and produce the whole thing in English? Kiri te Kanawa is of course a native English speaker and I can't imagine that the other singers would have had any difficulty.

Many patrons of the arts are elderly and reduced hearing is a normal part of aging so all recordings of operas and operettas should be fully subtitled, just as all live performances should include supertext.

And whatever limitations the show had were all more than made up for by Strauss's wonderful music.  The profundity of J.S. Bach is my musical home but you would have to be a sad soul indeed not to hear the joy that is in the music of Johann Strauss II.

Anybody interested can watch the whole thing online here -- with subtitles.

UPDATE from May, 2015:  I have just watched the show again and am even more grouchy about the trouser role this time.  I can see absolutely no artistic merit in having a bald woman in that role. Major performances of operetta usually have quite masculine-looking men in  important male roles.  I looked aside for most of the time when she was in focus.  Opera directors have substantial interpretive leeway so it seems a pity that this folly was continued.  Though maybe  he would have risked the wrath of feminists if he had changed it.

Why did Strauss specify a woman for that role?  There were frequent tensions between Austria and Russia around the turn of the century -- tensions that eventually gave us a world war.  So maybe casting a bald woman as a Russian prince was meant to be derisive, a derisive comment on Russians.  If so, it seems regrettable that a now obsolete political statement has been continued.

The ending was a trifle outside operetta conventions.  Normally at that point all the separated lovers get together and vow marriage.  But on this occasion the leading couple were already married.  Their marriage was however under tension as a result of the machinations of the bat so the ending consisted of the couple reaffirming their married bliss.  Only a touch outside convention!

Before I close off my comments here I am however going to mention something totally wicked -- something that will damn me to Hell for all time:  Sex appeal.  How dare anybody introduce a Hollywood term into a discussion within the world of Austro-Hungarian operetta?

But I am going to do it.  IMHO none of the ladies in this show had sex-appeal.  Kiri te Kanawa has a marvellous warm soprano voice, is a good actress and has pleasant looks -- but IMHO she has NO sex-appeal.  There! I have said it,  I have uttered a great blasphemy.

But this was of course an English production of something from deep in old Austria-Hungary.  And when I think of Austrian or South German productions of THEIR operettas, I think of gorgeous ladies such as Zabine Kapfinger, Anja Katharina Wigger, Dagmar Schellenberger and Ute Gfrerer.  Wigger is basically just a slim blonde but, in her 2008 performance at Moerbisch, she just oozes sex-appeal. So I  can imagine a more appealing production of Strauss's wonderful creation.