I am inclined to make a few comments about the translation of Die lustige Witwe.  The usual translation is "The merry widow" and I suppose that is close enough but "gay" or "pleasure-seeking" would approximate it too.  "Lustig" is not "lusty", however.  It is about having a good or entertaining time.

I was delighted recently to receive a DVD of the operetta by Lehar of that name which featured Dagmar Schellenberger as the leading lady.  After her performance as Mariza at Moerbisch I expected some brilliant singing and acting and I was not disappointed.

The performance was from Zuerich in der Schweiz, in the Zurich opera house  -- and that made clear to me how Moerbisch spoils us.  The high tech facilities at Moerbisch enable lots of very sharp and very close close-ups -- rather like in a Hollywood musical.  So facial expressions can be seen in great detail.  The technicians at Zurich were no slouch but broadcasting from an ordinary opera house did limit them, with the lighting apparently being the main culprit.

So the brilliant expressions that Schellenberger is known for were at their clearest only when she was under bright light.  Lighting varies in opera houses so clarity was on other occasions reduced.  There was not the constant clarity to be found at Moerbisch. What was particularly missing was Schellenberger's eyes.  She has the most expressive eyes and one could not always see them at critical junctures.  We saw enough of her, however, to marvel yet again at how well her face mirrored what was going on.  She has the most amazing range of expressions -- and all used appropriately to the story.  I liked it when she answered her difficult man with just one glance of her eyes.

And it's not only facial expressions. Her gestures and body language are eloquent too. Her body language when she was urging the dummer Reitersmann to claim her was a legend-quality example of non-verbally saying "take me".

And the very different role did call forth from Schellenberger a new lot of expressions.  This time she brilliantly conveyed disgust, pique and coquettishness -- among much else.  Her singing was as good as ever but the role did not really stretch her -- though she did belt out a few high notes for fun on occasions.

But it was a fun operetta and I will be watching it repeatedly.  It gains with each successive viewing of course.  The local patrons at the Teatro alla scala in Milano know that.  They normally know well the opera put on there but keep going along to absorb more of it.

I initially thought that Schellenberger looked younger than she was at Moerbisch but, on checking, I found that both performances were in 2004!  It shows how much difference hair, makeup and clothes can make.  And her role was quite different too.  At Moerbisch she was the haughty lady who fell in love against her better judgement whereas at Zurich she was the pretty and clever little lady who was determined to get her man.  And, this being operetta, she did, of course.  The man didn't have a hope.  Whether she IS the ultimate female or not, she certainly plays one with great conviction.

The Swiss were a bit more daring in the costume department too.  Both Schellenberger and Ute Gfrerer showed noticeable cleavage,  particularly so in the case of Gfrerer. Gfrerer was the second  lead, playing Valencienne, the attractive young singer married to a rich older man.

Gfrerer seems to be a rather jolly lady in general but her part in this show was almost wholly serious.  She was even asked, rather absurdly for her, to be Eine anstaendige Frau (a respectable wife). I was inclined to think that her notable bosom was what got her the part and that may have been so.  It did suit the role.  But she is also much acclaimed as a singer and actress. There is a bio of her here.

Her natural talent for gaiety did however surface in the dancing.  She was in any dancing going, whether the part really called for it or  not. She even led the cabaret dancers towards the end of the show. With big smiles and shrieks, her happiness throughout the dancing was a joy to watch.  She even got herself tipped upside down in that last segment! She is a naturally happy lady, I think.  And being born both beautiful and talented why should she not be happy? 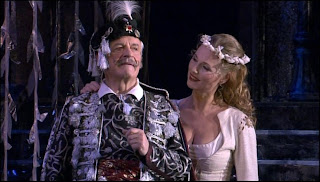 Schellenberger with the ambassador 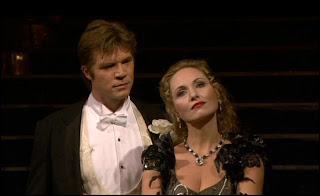 Schellenberger with her "difficult" man

In fact Zurich got top talent all round.  Even the conductor has a distinguished record. He was Franz Welser-Moest and when I saw him I thought he was rather young as conductors go -- but I was mistaken.  He was in fact 44 at the time.  A lot of German men are ageless for a long time and he is obviously one of those. Something to do with the climate, maybe.  I was at a conference at Oxford once when I saw a New York lady mistake a good-looking German man as being about 30.  He was closer to 50.

The music was of course good so it seems a pity that none of the arias seem to be much used outside the context of the operetta itself.  Some of the tunes might even reasonably be described as catchy. Vilja gets a very occasional airing as a concert piece by itself but even on YouTube most of the  renditions are extracted from stage performances of the operetta.

The inescapable Andre Rieu has of course grabbed it for his shows and in fact done rather well with it.  He has up a very sweet rendition by a slightly built black South African soprano named Kimmy Skota.  She does not of course have a fraction of Schellenberger's facial expressions but the singing is as good as any.  I find it hard to evaluate Schellenberger's performance of the aria as just singing.  I can't isolate the singing from the brilliant way she plays the part as a whole.

The stars of the show were undoubtedly the two ladies above but Njegus the majordomo was a great comic touch too. And Rudolf Hartmann made a great comic figure out of Baron Zeta.

And I must of course say something about the big and mellifluous American baritone, Rodney Gilfry, who has learnt enough Hoch Deutsch to play Graf Danilo well. His rugged good looks do make him credible in the part as much admired by women but he is quite powerless against the the German ultra feminine Schellenberger.  Schellenberger has been described as "Prussian energy plus feminine charm" --  and there is a lot to that. A real-life man could not withstand her for 5 minutes.

And the two little voiceless sobs she does in the humming song are immensely evocative, though I do think they are a bit of a trademark for her.  She is one clever lady.

A small language note:  The honorific Russian form of address "Gospodin"/"Gospodina" is used on occasions in the show -- presumably to identify the mythical country in which the show is set as Slavic (clearly modelled on Montenegro).  It means "Your honour" or "Gracious lady" or something along those lines.  It is perhaps a bit less empty than the German expression "Gnaedige Frau" (which is also used).

Speaking of expressions, it is mildly interesting that women in German lands rarely refer to their husband as a husband.  They refer to him as "mein Mann" (my man).  There is a German word for husband (Ehemann) but it seems to be little used. And Frau (woman) is also used to mean "wife".

Another language note:  As the anstaendige Frau is a recurrent theme, I thought I should elaborate a little on the meaning of anstaendig.  It is reasonably translated as "respectable" but it is also often translated as "decent".  It is a claim about her good character as well as a claim about her good reputation. On one occasion she describes herself in French as a femme d' honneur and I think that best captures what is intended for the part.  It means a "woman of honor".  Interesting that the old Latin word honor is still used in both English and French with the same, original meaning. I am mildly regretful that the Old English word mensk has been completely supplanted by it.

I was a bit peeved that the French used in the show was subtitled but not translated. I haven't spent one minute studying French.  But, fortunately, my general knowledge of European languages enabled me to get most of it.

Finally, is there a political message in the operetta?  Patriotism is rather clearly held up to ridicule in it but is Lehar ridiculing Austro/Hungarian patriotism, the patriotism of small countries or ridiculing patriotism generally?  I will have to read further on that, I think. He was not himself Jewish but his wife was and he associated a lot with Jews so that may have made him skeptical of the patriotic sentiments of the time.  On the other hand he spent a lot of his early life in the armed forces, which usually encourages patriotism.  On balance, I am inclined to suspect that he saw Austro/Hungarian patriotism as excessive. His near contemporary in England, W.S. Gilbert (in the Gilbert &  Sullivan light operas) was certainly no respecter of the establishment.