"The pirates of Penzance" as satire

And some surprising political implications

I first saw "Pirates" when I took my (then) teenage son to see a well-reviewed production of it here in Brisbane.  I am not at all a Gilbert & Sullivan devotee -- the profundity of Bach is my musical home -- but I know the G&S works as classics of entertainment. So I felt that I should help along my son's musical education.

Anyway, you see far more of any Singspiel on DVD than you do in a theatre audience so I recently acquired a DVD of "Pirates". And, watching it, I did see that it had elements of satire. "Pirates" is not of course satire an sich.  It is simply the madcap humour of W.S. Gilbert ably abetted by the great musical abilities of Arthur Sullivan. I see it as a forerunner of other madcap British comedies such as those of  Mr. Bean,  the Goons and the Pythons.

What differentiates comedy and satire is of course that satire is humour targeted at someone as a form of criticism.  It is deliberately didactic.  But straight comedy can teach lessons too, if only in an incidental way.  And I see some of that in "Pirates".  Perhaps a surprising one that I see is in the song of the "modern major general", now a widely treasured bit of fun.  What Gilbert was doing in that song was referring to something that no Leftist would believe: That  British military officers  were and are often quite scholarly in various ways.  That's not at all universal but not infrequent either.  Even an RSM will often be a man of unexpected depths.  The Sergeant Major of my old army unit  was/is in fact a fan of Bach and Palestrina (nothing to do with Palestine).   And the only Wing Commander (airforce) I know is a voracious reader with a wide knowledge of history.

Captain Cook, the 18th century British discoverer of much in the Pacific is a very good example of a scholarly military man.  His discovery of the cure for scurvy alone ranks him as a distinguished scientist and his practice of quarantine was exemplary for the times.

But a much less well known but quite commendable 18th century military man with scientific interests was Watkin Tench,  an officer in His Majesty's Marine Forces.  He was posted to the new British colony in Australia in its very earliest days, then a hardship posting.  You could lose your life just getting there and back.  So he was no elite soldier and was actually from a rather humble background.  His interest was meteorology and he brought with him the latest Fahrenheit thermometer. He kept a meteorological diary that included  observations from his thermometer taken four times daily in a sheltered spot -- exemplary practice even today.

And his record of the Sydney summer of 1790 is particularly interesting.  It was very hot.  There were even bats and birds falling out of the trees from the heat.  And his thermometer readings tell us exactly how hot.  So we have both readings from a scientific instrument and behavioural observations that validate the readings:  Very hard to question.  And the solidity of his data is very useful in exposing the liars of Australia's current Bureau of Meteorology.  They have got the virus of Warmism in their heads and are always claiming that Australia in whole or in part is currently experiencing a "hottest" year.  And they exploit the fact that Sydney does occasionally have some very hot summers.  But Tench's data show that such summers go back a long way in Sydney  and hence cannot be attrributed to nonsense about the current CO2 concentration in the atmosphere. The only additions to atmospheric CO2 from the Australia of Tench's days would have been the product of breathing by various living creatures.  There was not even any reticulated electricity anywhere in Australia or anywhere else at that time.

So in the famous song of the modern Major General, Gilbert was simply doing an amusing exaggeration of a real phenomenon, a military man with scientific interests, probably one better known to the British public when Gilbert wrote around 100 years ago.

I actually find prophetic Gilbert's treatment of the police ("When the foeman bares his steel").  The police have always been greatly  respected in Britain -- though that must have eroded in the last two decades -- but Gilbert defies that.  He makes fun of the police and portrays them as cowards.  As a portrayal of modern British police forces that would not be too far astray.  Did Gilbert have some experience of police to lead him to the derogatory view he took of them? I suspect it. In Strange Justice and Political Correctness Watch you will certainly find a wealth of instances of reprehensible behavior by the British police of today.

And the other police song ("A Policeman's Lot Is not a Happy One") is also very modern, expressing sympathy for offenders and a reluctance to arrest them.  Gilbert is actually a rather good prophet.

And the pirate King's assertion that "compared with respectability, piracy is comparatively honest" is also refeshingly cynical.  Commenters on modern-day "crony capitalism" in America will nod approval. And the decision of the daughters to "talk about the weather" rather than pry is quintessentially British. And the homage to Queen Victoria was also an appropriate contemporary reference but greatly exaggerated, of course.  It too could be seen as mocking by a modern audience

And I must pay tribute to the performance (in the production I have) to the singing of Linda Ronstadt.  Better known as a popular singer she is also a superb soprano and greatly ornaments the role of the Major General's daughter Mabel. 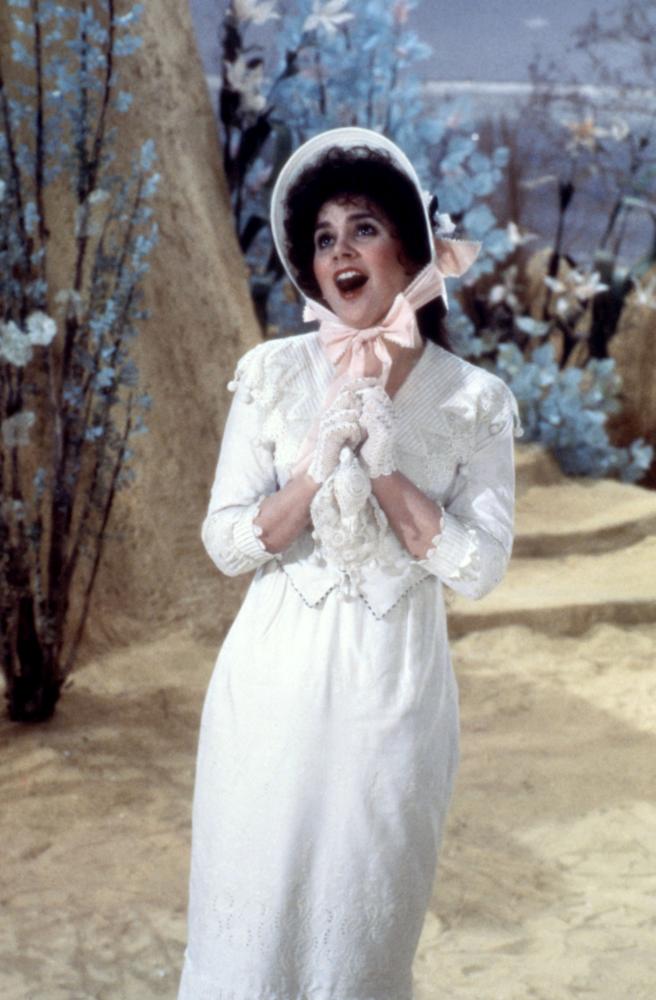 Linda Ronstadt as Mabel. Amid the total craziness of a W.S. Gilbert libretto she produces superb music. I cannot speak highly enough of her performance

FOOTNOTE:  I use the German word Singspiel above because there is no equivalent in English.  It means a "sung play" and refers to any musical performance (from Mozart's Zauberfloete ("Magic Flute") to Benatzky's beloved Im Weissen Roessl ("White Horse Inn")) that includes both spoken and sung dialogue.  A Hollywood musical such as "Showboat" is also a Singspiel.  English has a horde of words borrowed from other languages so it seems regrettable that a useful word like Singspiel has not been borrowed too.