Ian Hills and I both did our first degrees in the Dept. of Psychology at the University of Queensland in the '60s and both of us found Dr. Mangan's lectures interesting and influential. We therefore thought it was a pity that there was very little biographical information about him on the net. I therefore said to Ian that if he gathered all the info he could I would put it up on the net. Ian is in biographical mode at the moment. He is writing a memoir of his own time at Qld University in the sixties. His memoir of Dr. Mangan is below. It is as Ian wrote it with some very minor editing by me

As you will read, Dr Mangan had a big interest in the Soviet psychology of the day and you can see a token of that influence in my graduation photo below.  I posed holding a copy of the works of Ivan Petrovich Pavlov, printed in Moscow 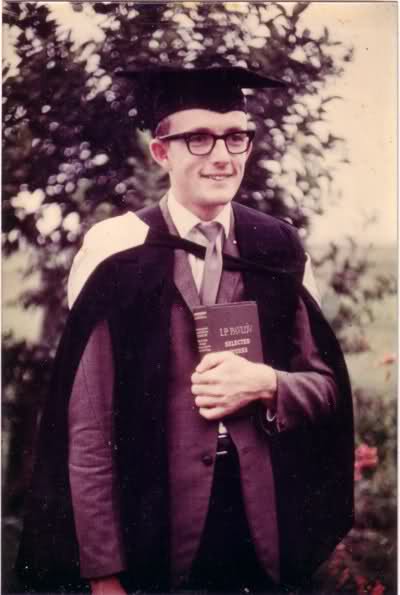 Ian has not said much about Gordon Mangan's character so I will hazard a few adjectives to describe him as I saw him: Affable, cheerful, enthusiastic and very self-confident -- JR


Dr Gordon Mangan was born in New Zealand in 1924 and completed his schooling there before taking the entrance examination to enter the University of New Zealand. In 1945 he was awarded a Masters degree in Education for his thesis involving a partial norming survey of the Stanford-Binet intelligence test for 15 and 16 year olds in New Zealand.

After a short stint as a high school teacher in 1954 he obtained a joint appointment as fellow of the Parapsychology Foundation and research associate at Duke University. In the fifties and sixties the Parapsychology Foundation and Duke University were renowned for taking the lead in research in paranormal psychology such as extra sensory perception (ESP) and psychokinesis (PK). In the following five years Dr Mangan made a substantial contribution to the parapsychology literature, publishing four experimental studies and three reviews.

After that productive five years of parapsychology research, Dr Mangan never published in the area again but he carried his experience in the area with him to the University of Queensland in 1961.

After leaving Queensland University in the mid seventies Dr Mangan joined one of England's elite Universities and taught psychology at Oxford. While at Oxford he continued to explore the similarities between Eastern and Western Psychology and published papers outlining the genetic, personality and nervous system implications.

While at Oxford in 1982 he published his best-known work "The Biology of Human Conduct: East-West Models of Temperament and Personality". He also published in other areas, for example papers on repression and muscle tension and the genetics of the nervous system.

While at Oxford Dr Mangan controversially tapped a rich vein of research funding from the tobacco industry and began a long association with the industry with publications on smoking maintenance, smoking and learning and the psychopharmacology of smoking.

According to Adams (2016) by 1981, some time after arriving at Oxford, Mangan began talking about returning to New Zealand and after a few years he moved to the University of Auckland where he stayed until his retirement.

For around a decade in Auckland at the end of his career Dr Mangan continued to research at a lively pace, publishing papers on personality and conditioning, music and IQ, IQ and reaction time, IQ and Evoked Potential; and smoking and IQ, reaction time and memory. He also revised and published a further edition of "The Biology of Human Conduct".

After a long, productive and interesting career as a researcher and teacher of psychology Dr Mangan continued to publish innovative research until 1995 when he was 72. His most recent  publication is a further reprinting of "The Biology of Human Conduct" published in 2013 when Dr Mangan was 89 years old.

In 2016 an Answers.com query "Is Gordon Lavelle Mangan still alive in New Zealand" yielded a response of "He most certainly is":  A very Mangan reply. Good to see he has still got his marbles. He is 92 years old this year.

I attended Dr Mangan's classes during his time as Senior lecturer in Psychology at University of Queensland. He gave many of the second and third year lectures in learning theory, social psychology, neurology and psychophysics and conducted many of the practical sessions as well.

At that time Dr. Mangan would have been in his late thirties and I remember him as a tall, dark haired, clean shaven man who dressed well but untidily like an absent-minded professor. He always wore a bow tie, spoke precisely and appeared somewhat eccentric.

A good example of his approach to teaching and research was an experiment conducted as a class exercise, to demonstrate the effect of physiological arousal on visual acuity. For this exercise half the class fasted until the afternoon prac. class. We all then attempted to detect the first glimmer of light from a stimulus box, as it was gradually intensified. The hungry students detected the light before the ones who had eaten.

Dr Mangan's lectures on the nervous system were memorable - although I remember being quite confused with his description of the structure and function of different parts of a rat's brain. It took me a long time to learn what all the bits were called and what function they had. These lectures provided some of the basis for some of my later work in neuropsychology and the diagnosis of brain dysfunction.

Towards the end of his time at Queensland University Dr Mangan published prodigiously - more than a dozen papers in two years - on topics as diverse as personality variables related to visual sensitivity and the orienting reaction, arousability and distraction, after images and personality, and approach-avoidance conflict. He ran and published a Behaviour Therapy Symposium and began publishing in the area that was to become a major research area for him - the relationship between Pavlovian (Russian) and Eysenckian (Western) personality paradigms.

Soviet psychology generated a lot of interest in the University of Queensland Psychology Department, as in many others in the Western world and Dr Mangan led the enthusiastic discussion of Pavlov's dog experiments and Pavlov's typology.

Strangely, this enthusiasm did not extend to replicating Pavlov's experiments and I don't recall much experimentation along these lines being conducted in Queensland at the time. This might be because some of Pavlov's experiments were considered cruel, or possibly because a publication citing Russian authors might attract the attention of ASIO - Australia's security service. Even in the late sixties it was still a bad career move in Australia to be associated in any way with communism.

Even so, a small but brave contingent from the Queensland University Psychology Department made a scientific visit to Russia in the sixties and presumably had to put up with the attentions of ASIO. I might add that Dr Mangan who led this expedition moved to England shortly thereafter where he could enjoy a more tolerant politico-academic environment.

Dr Mangan continued his interest in Russian psychology and twenty years later wrote an influential book integrating Russian and Western personality theories. Even in the sixties at Queensland University he had developed the basics of his theory and I recall him discussing the similarity between extraversion-introversion (from the Western paradigm) and excitation-inhibition (from the Russian paradigm). Similarly he drew a parallel between the neuroticism dimension (after Cattell and Eysenk) and the strong-weak nervous system dimension of Pavlov.

An overview of his publications might lead to the conclusion that he deliberately chose areas that were neglected and controversial. He devoted half a decade of his early career to parapsychology, publishing innovative research and clearheaded reviews. He devoted the later part of his career to research in smoking - funded by the tobacco industry.

He had a lasting interest in Russian psychology particularly Pavlov and the neo-Pavlovians. A considerable amount of his work is devoted to drawing parallels between Eastern and Western conceptualisations of personality, learning and activation which culminated in an influential book "The Biology of Human Conduct: East-West Models of Temperament and Personality".

As well as these three areas he published over a broad range of topics including intelligence, aging, learning, conflict, behaviour therapy, personality, attention, music and arousal.

Mangan, Gordon Lavelle "Evidence of Displacement in a Precognitive Test." Journal of Parapsychology(March 1955).

Mangan, Gordon Lavelle. "How Legitimate Are the Claims for ESP?" Australian Journal of Psychology(September 1959).

Mangan, Gordon L., 1967, Studies Of The Relationship Between Neo-Pavlovian Properties Of Higher Nervous Activity And Western Personality Dimensions: Ii. The Relation Of Mobility To Perceptual Flexibility.  Journal of Experimental Research in Personality, Vol 2(2), 1967, 107-116.

Mangan, G., and Colrain, I., 1991, Relationships Between Photic Driving, Nicotine and Memory, in Effects of Nicotine on Biological Systems, Birkhauser Basel

Mangan, G., 1945, A Survey of the Revised Stanford-Binet Scale with New Zealand I5 and I6 Year Olds: A Thesis Submitted for the Degree of Master of Arts in Education, University of New Zealand

Mangan, Gordon L., and O'Gorman, John G., 1969, Initial amplitude and rate of habituation of orienting reaction in relation to extraversion and neuroticism. Journal of Experimental Research in Personality, Vol 3(4), 275-282.

Mangan, G., L., The Relationship of Mobility of Inhibition to Rate of Inhibitory Growth and Measures of Flexibility, Extraversion, and Neuroticism, The Journal of General Psychology, Volume 99, Issue 2, 271-279.