I have the 2001 Moerbisch performance of the show. Das Land des Laechelns means "The land of smiles" -- i.e. China.  I was very curious to see how a Viennese composer and his librettists would write about China!    My skepticism that Austrians could write reasonably about China in 1923 was actually rather unfair.  Chinoiserie had been very popular even in the late Belle epoque (before WWI) so China was hardly a mystery by then. And interest in the Far East generally had been greatly aroused in 1905 when Japan's admiral Togo sank most of the Russian navy!

The opening scenes of operetta are often pretty forgettable and I tend to skip them on re-watching a show but the opening brackets of this  show were all devoted to showing the supreme grace and elegance of the great city so were very pleasing to watch.

The show was basically in two parts: First in Vienna then in China. The first part was where most of the jokes were -- though the eunuch scene in the second half of the play had some very good lighter moments too.

The story is that a Viennese lady and a Chinese prince fall in love in Vienna and both then go to China -- with unhappy results.

The idea that a smallish East Asian man might fancy a big blue eyed blonde from Northern Europe was very plausible. For better or worse, the Nordic ideal of beauty is the default ideal worldwide.  Something like 95% of the world's blonde ladies were not born that way.  Even in Japan, ladies blond their hair.

Blue eyes are also much admired but, unlike hair, eyes are not so changeable. I checked my blue-eyed privilege and married four blue eyed ladies -- so I have a blue-eyed son.  And his blue-eyed GF augurs well for the next generation. Leftists these days often tell us to "check your privilege" but I don't think they would approve of my version of that.  Their version is just Marxist claptrap anyway.

In part 1 of the Singspiel we first heard the famous "Dein ist mein ganzes Herz" ("You are my heart's delight"). It is a great and famous aria and was originally written by Lehar for Richard Tauber so it seemed a bit strange to hear it sung by an Asian  tenor. Sangho Choi gave an impassioned performance, however, so did it justice. Tauber sings it here -- in English! I am inclined to think that the Korean (Sangho Choi as the Chinese Prince)  sang it better, actually. The audience at Moerbisch certainly applauded it heartily.

And the second half of the show was surprisingly dark and tragic for an operetta.  The lady goes to China but can't fit in there so has to make her escape.  Her lover reverts to Chinese form and she ends up tragically by declaring to him:  "Ich hasse dich" ("I hate you").

So the ending is low-key by operetta standards. The lady and her Viennese admirer are happily reunited and escape back to their beloved Wien but the Chinese players are left desolate. Not good. Had it been grand opera, everyone would have died, so we have to be thankful for small mercies, I suppose.

It's interesting how times have changed.  Wien was once THE city and China was a backwater.  These days it is just about opposite to that.

I was MOST impressed by the magnificent riding habit "Lisa" (Ingrid Habermann) wore for her entry to the show.  I have not seen anything before remotely as good.  It must be Austrian elegance.

And the military hats on the men in the early scenes initially rather confounded me. They were such an unostentatious type of shako that I thought at first that they were French pillbox caps. But in fact we see below the unfortunate Archduke Ferdinand in a similar shako. The costume department did their homework. 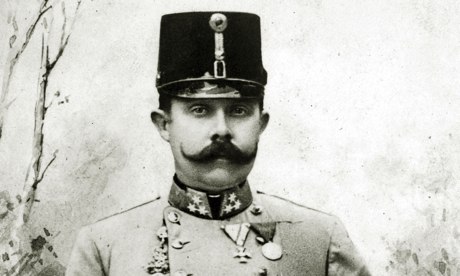 Speaking of hats, was this the first time Serafin trotted out absurd green plumes on his hat?  He did it in Weissen Roessl too.  A good comic touch.

Towards the end of the first part, I loved the old car that took "Lisa" away.  A bit like a very well-appointed A-model Ford.

And we got in part 1 a good introduction to Ingrid Habermann as the lady the Chinese Prince fancied -- a regal and classically good looking Vienna lady with blue eyes and a great mop of blonde hair.  I would have fancied her too. I did, after all, once marry a lady with a great mop of blonde hair.  Habermann was presented as the aspirational Austrian lady, even wearing a substantial tiara at one stage -- showing her as a princess of Viennese society.

The contrast in appearance between Habermann and her Chinese admirer was of course deliberate.

Habermann is actually Austrian -- from Linz -- so the part would have been very congenial and easy for her. She really is an aspirational Austrian lady.  Even the blonde hair may well have been real.  The age of most operatic ladies seems to be a State Secret so I was not able to ascertain her DoB but I suspect that she was in her 30s for this show.  She was a touch "broad in the beam" for youth, if I may add a nautical simile to the architectural similes that one sometimes finds in operatta.

Austria is in fact rather Southerly in Europe but the Nordics from both the North and South coasts of the Baltic have been marauding South for well over 2,000 years so seem to have left rather a lot of their genetics in Austria. So much so that we hear that Die ganze Welt ist himmelblau there.  There are some brilliant blue eyes in Austria to this day.  Austria looks like a rather nice bit of territory so maybe a lot of Nordics never went home from there.

But the show was a magnificent part for Habermann and she went from strength to strength thereafter.  Moerbisch has been a place of takeoff for many singers and I am hoping that will work for Cornelia Zink (seen in Bettelstudent) as well.

Intendant Harald Serafin gave most of the jokes in the show  to himself.  He is very good at comic parts so that was fair enough.  He always took a part in Moerbisch performances as well as directing them.

He got his post at Moerbisch because he was already a great actor and singer and I have always liked him in his various roles.  Even in 2011 when he rather lost the plot at Moerbisch he did his own part very well.

Apparently I was not the only one who thought he lost the plot in 2011. The year after 2011 his audience at Moerbisch declined -- resulting in him being retired against his wishes.  So Schellenberger got his job.  And she did it well, with audiences numbers recovering in 2013 (with Bettelstudent).

After watching the show  again, I still laughed at all the jokes again.  Serafin delivers them expertly.  His dry comment on a Chinese "dirndl" was exquisite, as was his non-recognition of Confucius.

But Serafin does his tragic scene well too. His tragic final call to his departing daughter not to forget Vienna is very significant.  As I have argued previously, Vienna at that time was what New Yorkers think NYC is -- the center of the civilized world.  And she later did admit with passion how much she missed Wien.  Only in her hometown could she be "free".  New Yorkers would understand.

Speaking of jokes, another was when "Gustl" (Gustav) in the second half excused himself from being a fickle Viennese by saying that he was from "Burgenland", I thought that was quite good.  The audience did too.  That got a laugh, though not a big one. Burgenland is of course where Moerbish is located.  But Mitani's reply was good too: "Isn't that the same?"  Moerbisch and Vienna are only about 60 kilometers apart, from memory.  Most of the shows from Moerbisch do incorporate some reference to it -- most often in a complaint about the mosquitoes there.

And I must pay some tribute to Yuko Mitani, the Japanese soprano playing the Prince's sister.  Having a Japanese playing a Chinese was no problem, of course.  They all look the same, you know.  Jokes aside, however, by her manner she could have been a Viennese lady.  I guess it shows how much of Western culture Japan has absorbed.  She was certainly as expressive as one could wish, quite un-Japanese, it seems to me. The show was part-sponsored by NHK in Tokyo so perhaps it all fits somehow. Most of Mitani's singing history has been in the German lands.

A final point of amusement: There were no actual Chinese in the show. The Chinese parts were mainly played by Japanese plus one Korean (Sangho Choi). Serafin would have got into trouble if he had done that in politically correct America.  And even I am a bit stunned to find that Sangho Choi is an acclaimed interpreter of German Lieder.  What is the world coming to? Sangho Choi deserves his success, however.

The show is also reviewed here, with a more comprehensive account of the plot.