I have been watching a set of DVDs of a 2005  performance of Giulio Cesare at Glyndebourne and there is virtually nothing about the staging that I agree with.  The music was fine and the singers talented but the artistic director of the performance gave the impression of being under the spell of the deplorable modern urge to be "creative" about the staging.

And, sadly, his creativity was so impoverished that he mistook anachronism for originality.  He seemed to think that having airships and steamships in the background of an opera set in ancient Egypt was somehow clever -- not to mention the revolvers, rifles, sunglasses, cocktail dresses and pith helmets. Why is deliberate anachronism clever? I have no idea.   There was zero attempt to present the life and times of Caesar and Cleopatra authentically.

And particularly in Act 3 a lot of the arias were sung with the actors lying on the ground. How is that for moronic choreography? Most of the live audience would have been able to see nothing at such times.

Not for me I am afraid.  People go to a stage show to see the creativity of the author and that is what the artistic director should be trying to bring out -- not display some petty creativity of his own

I watched the very extensive "after-notes" on the DVD and they did feature wide-ranging comments by David McVicar, the distinguished Scottish artistic director.  And although I disagree with just about everything he did, I have to concede that he is a man of great sensitivity and sensibility, in a notably "camp" way.

He was obviously devoted to the work, which is admirable, but clearly saw his role as making Handel more "accessible" to modern audiences.  But he seems to have had a very dim view of his audience.  He seems to have seen them as simpletons who need to be talked down to, with schoolboy humour, if necessary.  At Glyndebourne??

He seems to have thought that largely Edwardian costumes, props etc. accomplished that.  And he had no idea of military deportment.  He had some soldiers moving at one stage as if they had pooed their pants! And what on earth was achieved by having pictures of WWI battleships, blimps and RMS "Titanic" in the background? Arty people just get too detached, sometimes, and McVicar being homosexual probably isolated him even more than usual.

How could he be so totally unaware of the great success the BBC has had with costume dramas?  Togas and Egyptian finery would have been both in keeping with the story and enjoyed by the audience. And there was no lack of precedent for that approach.  Aida is often done with an approach to Egyptian sets and costumes.  Most of the props and costumes needed were probably already in store at Glyndebourne.

And the voices were so unbalanced!  Maltman was the only decent male voice in the show.  The rest were females plus one counter-tenor.  Was that supposed to be politically correct, or something?  It was certainly tiring and ridiculous artistically.  I very much like soprano voices but you can have too much of a good thing.

And, sadly, that was an excellent chance to be original that was missed.  When Handel wrote the opera, castrati were all the rage so the songs of some male figures were given in a high key that only women and counter-tenors can now reach.  So Caesar was played by a woman in order to be faithful to the notes as written by Handel.  I deplore trouser roles generally but a female Caesar is frankly ridiculous.  Now that the fashion for castrati is long gone, it would surely have been desirable to drop all the male parts down an octave or two and have men in men's parts.

Can do better Glyndebourne.  Maybe they could re-run the opera (minus the anachronisms of course) with Caesar as a bass and the other males as baritones.  That alone would generate great excitement, I fancy 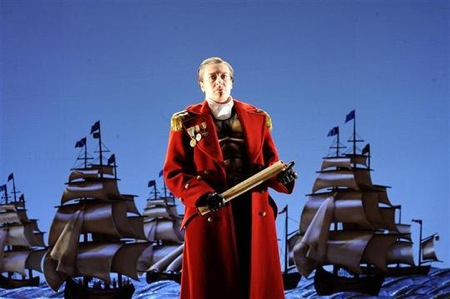 From the opening scene

I would be remiss if I did not record my appreciation of the performances by Christopher Maltman and Danielle de Niese in the opera.  Maltman is multi-talented.  He is a singer who is also an accomplished acrobat!  And he acts well too.  His representation of Achilla represents a military man well.  It takes a man to portray a man!  Shockingly "sexist" of me, I know.

And the unfailing energy of Australian singer Danielle de Niese as Cleopatra is also impressive. She had some long arias to sing but her rich soprano voice never faltered and her facial expressions mirrored every word she sang.  She was no Cleopatra in looks and her dancing was very basic but her singing was awesome. She is a mixed-race ("Burgher") Sri Lankan by ancestry but was born and bred in Australia.

I particularly enjoyed Cleopatra's triumphant aria towards the end of Act 3. It is probably not one of the "great" soprano arias but it is certainly one of the longest. And with Handel composing it is superb as well as long.  The immediate and huge applause that comes at the end of the aria is amply justified.

As I write this I am listening to the energetic and marvellous brass fanfare that introduces the end of the opera. Quite incredibly good. Handel never lets us down.

The whole opera is online here:

A couple of good excerpts: