I recently went to "The perfect American" by modern composer Philip Glass. It was a good opera, with lots going on, lots of drama and lots of dramatic music. It even had a death scene. So, except for Glass's unique music, it could have been a 19th century opera. I went to it only for the music but it was a good show as well. One's attention did not wander.

The whole point of the opera was to lampoon Walt Disney. The intelligentsia will never forgive Disney for being anti-Communist but to my mind those who make excuses for Communism are the ethical cripples.

Disney was portrayed as a pathological egotist. I am in no doubt that a hugely successful entrepreneur such as Disney had to have a considerable ego but I am equally sure that a man who built up from scratch such a huge organization as the Disney organization had to be a very good people manager -- and no-one likes an egotist. So whatever ego Disney had must have at least been kept in check most of the time. So I very much doubt the accuracy of the Disney portrayal by Glass. But much in the opera was admittedly fictional so I suppose one should not take it as history

Another historical blooper was the portrayal of Abraham Lincoln as a champion of blacks and a believer in equality. That is schoolboy history. Lincoln was neither of those things. In his famous letter to Horace Greeley Lincoln said that it was only the union he cared about, not blacks. And after the war he wanted to send them all back to Africa, but was shot before he could implement that. Let's have some words from the man himself, words spoken at the White House and addressed to a group of black community leaders on August 14th, 1862:

"You and we are different races. We have between us a broader difference than exists between almost any other two races. Whether it is right or wrong I need not discuss, but this physical difference is a great disadvantage to us both, as I think your race suffer very greatly, many of them by living among us, while ours suffer from your presence. In a word, we suffer on each side. If this be admitted, it affords a reason at least why we should be separated. It is better for both, therefore, to be separated."

And Glass's history is equally shaky in portraying Disney as a racist. His biographer Neal Gabler in his 2009 book 'Walt Disney: The Triumph of the American Imagination' concludes, "Walt Disney was no racist. He never, either publicly or privately, made disparaging remarks about blacks or asserted white superiority. Like most white Americans of his generation, however, he was racially insensitive."

Why the opera first went to Madrid, then to London and then to Brisbane I do not know. It was a very extravagant production in Brisbane with a far larger cast than needful and a huge (4-ton!) mechanical contraption in the roof used to change scenes etc so maybe it was that only the Brisbane arts community felt able to afford it.

Below is a picture of the front cover of the program notes for the opera. It is supposed to be a blending of Walt's face with the face of Mickey mouse. The effect, however, is to make Disney look insane, and certainly two-faced. So it is all part of the demonization of him. A most unpleasant and disturbing piece of Leftist art. 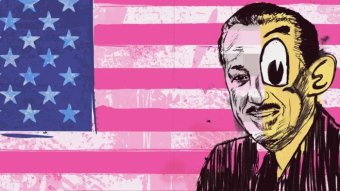 Leftists customarily envy other people's success and Disney was VERY successful, so this attempt to pull his memory down might have been expected